For the third consecutive year, Maritime are supporting The Royal British Legion as one of their chosen charities in 2017 and spent the weekend of the 28th and 29th October fixing over 1,100 poppies to their entire fleet.

Maritime’s iconic blue and white livery will display the symbolic red poppy for the entire period of remembrance, a decision that is whole heartedly supported by the company as a number of their staff are ex-service men and women.

In a military-esque operation across all 27 of Maritime’s depots, volunteers from across the Company’s workforce gave up their weekend to ensure every vehicle was proudly displaying the poppy come Monday morning.

“We are extremely proud to be able to support The Royal British Legion and their Poppy Appeal,” said John Williams, Group Managing Director at Maritime. “The charity offer a great deal of support to both serving and ex-service personnel – as well as their families – and means so much to so many people.”

Suffolk’s fundraising for the Poppy Appeal was launched over the same weekend in Felixstowe, the town in which Maritime have their award winning head office. In a ceremony attended by the Mayor of Felixstowe – Nick Barber, Suffolk Deputy Lieutenant – Mrs Gulshan Keyembe, Felixstowe Poppy Organisers – Dawn and Stephen Kemp and Suffolk Community Fundraiser RBL Poppy Appeal - Mandi Cox-Osborne, Gary Austin, one of Maritime’s Transport Managers, proudly presented The Royal British Legion with a cheque for £11,000 following a parade through the town by the Salvation Army and cadets. 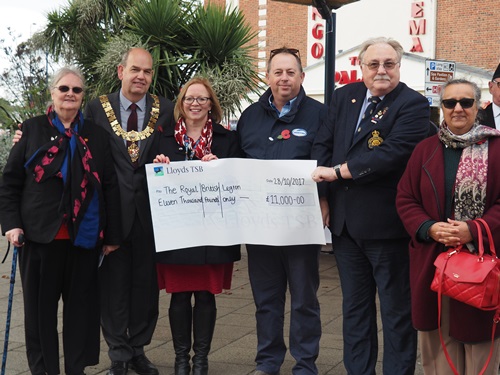 “Last year The Royal British Legion raised £770,000 with the Poppy Appeal and it has made such a difference to so many families,” said Mandi Cox-Osborne, Community Fundraiser in Suffolk. “We were delighted that Maritime were able to join us at our launch and once again can’t thank them enough for their generous donation and continued support of both the Poppy Appeal and The Royal British Legion.”