Maritime Transport (Maritime) were delighted to return to this year's Multimodal exhibition after a years hiatus and they returned in typical style.

Their stand, calling upon some of the finishes used at their flagship 35,000sq ft head office, was certainly a head-turner and featured a Nespresso coffee bar as well as a hugely popular truck driving competition.

The game featured Scania Highline replica Maritime vehicles which contestants had to reverse onto a Maritime distribution centre – it wasn’t as easy as you might think with the two minute time limit proving quite a challenge in itself!

Extremely popular throughout the show, Maritime’s week only got better when they won the coveted “Road Freight Operator of the Year” award voted for by those in the industry, “the award was fantastic recognition of our efforts over the past year,” said Dave Boomer, Managing Director – Distribution. “A number of our customers commented that they had cast their votes and we were delighted with the level of support we received.”

Maritime used the show this year to further market their development into the distribution, rail and warehousing sectors. They now boast a curtain-sided fleet with in excess of 400 XL-specification trailers and their Midlands railport facility also won additional services resulting in the site now having daily rail links to every major UK Port. 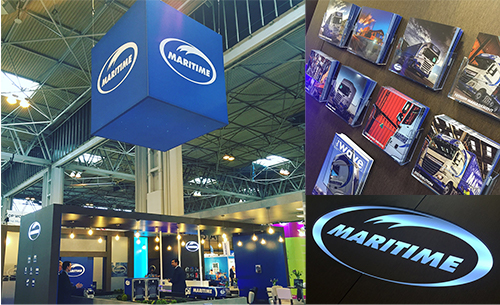