The campaign, titled ‘Litter-Free Roads & Lay-bys’, goes live today (Earth Day - 22nd April), and aims to unite members of the transport and logistics community to tackle the dramatic rise in roadside litter which continues to have a devastating impact on wildlife and the environment, whilst raising an even greater awareness to other road users nationally with the hope of eventually eliminating the litter epidemic. Other campaign aims include improving roadside anti-litter signage as a reminder to motorists, and advising the relevant authorities of litter hotspots that have been identified.

Maritime, alongside various other hauliers and three major UK ports who have signed the litter-free pledge, will be organising regular litter picks across its 40+ depots spanning the UK and surrounding areas which drivers and staff will be invited to take part in. The company has also increased anti-littering signage at each of its depots and has published various communications aimed at its employees to drive awareness including posters, notices, and messages exhibited on digital displays reinforcing the campaign’s message.

Commenting on the campaign, John Williams, Group Executive Chairman at Maritime, stated: ‘As one of the UK’s largest transport operators with over 2,000 vehicles on the road, it is our duty to ensure we protect our environment and keep our roads clean and free from rubbish, not just for ourselves but for future generations. We are incredibly proud to sign the litter-free pledge and will continue working tirelessly to raise a greater awareness to our colleagues and the public.’

He added: ‘We hope this campaign will gather support, attract attention, and raise awareness of the problem which is vital to changing things for the better, and urge other businesses to partake in this fantastic initiative. Thank you to Debbie and the amazing volunteers at LLF as well as those taking part in this campaign for your remarkable work.’

Debbie Bartlett, founder of LFF, launched the group in 2018, which now has more than 1,000 members and volunteers of all ages who meet regularly to pick litter in Felixstowe, and educate people about the issue. Positive actions are frequently recognised via the group’s Facebook page, Litter-Free Felixstowe.

‘It has been truly amazing to see so many businesses stepping up and working together to tackle rising litter levels across the UK – it really does have a much bigger impact,’ said Debbie Bartlett, LFF. ‘We are really pleased to be working with Maritime who have a major presence in Felixstowe and the rest of the UK, and will work closely with them to keep Britain’s roads and lay-bys clean.’ 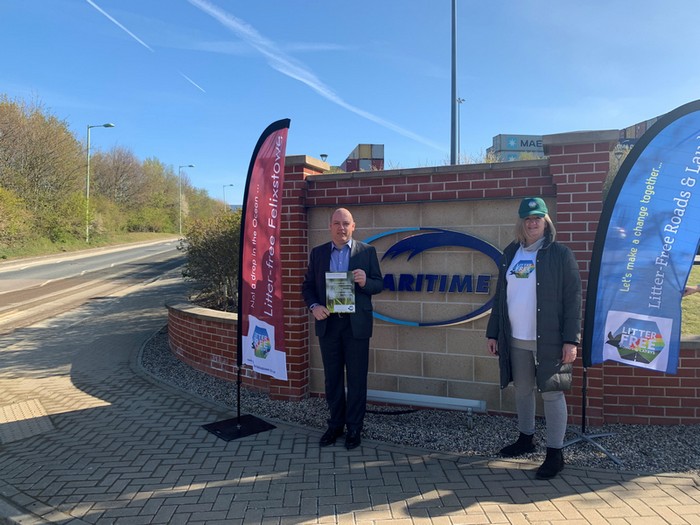